Myositis is the name for a group of rare inflammatory conditions affecting the muscles. The main symptoms are weak, painful or aching muscles, which usually gets slowly worse over time. The three principal types are:

IBM, which is sometimes termed ‘Sporadic Inclusion Body Myositis’ (sIBM), was first recognised as a disease in the 1960s. It is extremely rare, with a prevalence of well under than 100 per million. However, it tends to affect people over 50 and is actually the most common inflammatory muscle disease in older adults. IBM is more common in men.

How can we help?

At Fortuna we have experience with many conditions and can advise on equipment which can help.

The underlying cause of IBM is poorly understood and is likely to result from the interaction of genetic, immune-related and environmental factors.

Muscle damage occurs through two parallel processes, degeneration and autoimmune inflammation – it remains unclear which is the primary cause, and which is a secondary consequence.  It is not known whether an external trigger, such as a viral infection, is associated with the onset of the changes.

While IBM is not directly inherited, there are genetic features that appear to predispose a person to getting IBM. Some 67% of IBM patients have a particular combination of ‘human leukocyte antigen genes’. IBM cannot be transmitted to other people.

IBM is characterised by slowly progressive weakness and wasting of both proximal muscles (closest to the body's midline) and distal muscles (the limbs). Muscular discomfort, tiredness and feelings of depression may be associated with IBM. There can be significant variation both in the pattern of symptoms and the age of onset. Symptoms usually develop slowly and progressively, over months or years; in general, the older a person is when IBM begins, the more rapid the progression of the condition. Eventually this can lead to severe weakness and wasting of arm and leg muscles and severe disability.

IBM is not considered a fatal disorder, but patients may become unable to perform activities of daily living and most require assistive devices within 5 to 10 years. Lifespan should generally be unaffected, but severe complications can lead to loss of life. IBM does not usually affect muscles of the heart, eye, gut or bladder. Neurological function, including sensation, thinking and speech is generally spared.

Arm Weakness
Common early upper limb symptoms include trouble manipulating the fingers, leading to difficulty with tasks such as turning doorknobs or gripping keys. As IBM progresses and impairment of finger function deteriorates there can be increasing problems with: using pens, keys, buttons, and zippers, pulling handles, and firmly grasping handshakes.

Leg Weakness
Legs are often badly affected, with weakness of the quadriceps muscles, which straighten the knees, leading to difficulty going up stairs. Standing from a chair or toilet also becomes an increasing problem – due to the quadriceps weakness it is necessary to lock knees before standing in weight-bearing position. This can cause particular difficulty when using the toilet and even with standard riser recliner chairs.

Walking also becomes more precarious - in the early stages of IBM there may be frequent tripping, potentially made worse by footdrop. Balance problems and falling more easily occurs as the muscles cannot compensate when the centre of gravity shifts, for instance when walking on uneven surfaces.

Other Symptoms
Some people develop weakness of the facial muscles which leads to difficulty with swallowing (dysphagia). This may cause fragments of food or drink to enter the windpipe resulting in coughing after meals and sometimes chest infections. This may be progressive and can become severe enough to require treatment.

As well as problems caused by specific muscular weakness, more general problems can occur:
- low mood and depression are common and can be an early indicator of the disease, before any muscle weakness is noticed.
- reduced capacity for exercise, probably due to a sedentary lifestyle resulting from decreased mobility. Exercise is therefore important to maintain aerobic capacity.

Serious complications can arise in IBM: falls can result in fractures or head injury, while chest infections can occur due to lack of mobility or due to dysphagia causing aspiration pneumonia. Dysphagia can also cause some people to reduce their intake of food with significant malnutrition and weight loss.

There is no single diagnostic test and therefore diagnosis is dependent on the clinical features (symptoms and signs) in combination with the results of the following tests:
a. Blood tests
- in most cases creatine kinase (CK) levels in the blood are raised.
- antibodies to cytoplasmic 5'-nucleotidase (cN1A; NT5C1A) are strongly associated with IBM.
b. Electromyography (EMG) studies, in which tiny needles are positioned in the muscle, usually display abnormalities such as short duration motor unit potentials. Although EMG may be helpful it cannot make a definite diagnosis.
c. Muscle biopsy may demonstrate inflammatory cells invading muscle cells, vascular degeneration, inclusions or plaques of abnormal proteins. However, the diagnosis of IBM is difficult even with a biopsy. In the clinical context of a classic history and positive antibodies, a muscle biopsy might be unnecessary.

Differential diagnosis
IBM is often initially misdiagnosed as polymyositis. A course of steroids may be given with no improvement before IBM is eventually confirmed. Polymyositis has an onset of weeks or months, while weakness in IBM comes on over months or years and progresses steadily. Other forms of muscular dystrophy (e.g. limb girdle dystrophy) may sometimes also be considered.

IBM is a very rare condition, and many doctors will not have heard of it while most GPs will not see a case during their career. There is currently no cure for IBM and unlike other forms of myositis, it is usually progressive and very difficult to treat. Anti-inflammatory, immunosuppressant, or immunomodulatory therapy do not reliably slow or stop the progression of the disease. Recent trials have studied Intravenous Infusions of Human Immunoglobulin (IVIG) in IBM, but the results have been contradictory, with no firm evidence of enduring benefit. Further trials continue, but currently routine treatment with IVIG is not justified.

Research into the cause of the disease is continuing and will hopefully lead to new and effective treatment in the future. However, at present, management is essentially symptomatic. Exercise is important and as symptoms progress, input from physiotherapists may be needed. Specific aims are:

The management of swallowing difficulties (dysphagia) is important as not only is dysphagia unpleasant in itself, but it can lead to reduced food and fluid intake with malnourishment and also potentially dangerous aspiration pneumonia. Speech therapists can advise on strategies to help swallowing, while nutritionists can advise on how best to maintain adequate nutrition.

Occupational therapists (OTs) can advise on strategies, aids and equipment to assist in the everyday practical problems that become increasingly difficult for IBM patients with weakened muscles.

At Fortuna we work closely with OTs, taking part in joint visits for 'assessment of needs' and then recommending equipment to help with the challenges that IBM brings.

Learn More about how Fortuna can help with IBM. 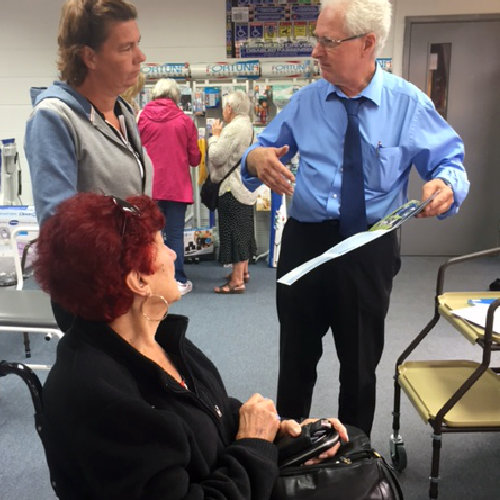 Myositis UK
The UK charity Myositis UK has more information about the different types of myositis. Find out more about IBM.

Inclusion Body Myositis (Wikipedia)
For a comprehensive review of this rare condition. 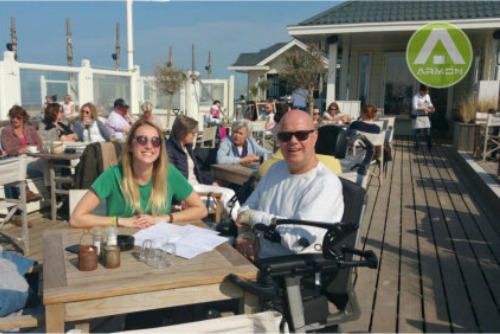